Well, crap. I knew he was getting old, and frail. And we hadn't seen him much lately. But dammit, mortality sucks. Gene Wilder is probably in my top five all time favorite performers. His late wife Gilda Radner ranked even higher. But Gene had far more success, and left so many marks in my pop culture database, this one hurts almost as much. Blazing Saddles. Young Frankenstein. Willy Wonka. Silver Streak. Stir Crazy. The Producers. His heyday may have been too long ago for Millennials and late Gen-Xers to remember, but even then, his Wonka character has been one of the most successful and versatile memes out there: 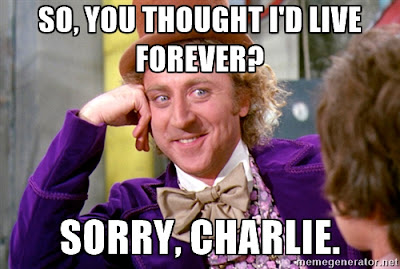 And the one quote that resonates so well as an answer to anyone bested:


But for me, there are those iconic roles in some of my favorite movies, not to mention appearances in oddball features like The Adventure of Sherlock Holmes' Smarter Brother, and many others. I didn't expect he'd probably be well enough to ever make new contributions to culture. But there's something about knowing that he never will that makes me very sad. RIP, Mr. Wilder. You will truly never be forgotten.

Gene Wilder, who regularly stole the show in such comedic gems as “The Producers,” “Blazing Saddles,” “Young Frankenstein,” “Willy Wonka and the Chocolate Factory” and “Stir Crazy,” died Monday at his home in Stamford, Conn. His nephew Jordan Walker-Pearlman said he died of complications from Alzheimer’s disease. He was 83. . .