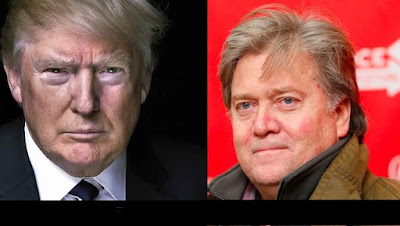 Well, another week went by just that quickly, and then some. Had some family in here at Casa Greenlee, and some medical things to tend to as well, and before you know it, 10 days go by. Sorry, blogisphere, it's sometimes just like that 'round here.

But I wanted to weigh in on this most recent Trump revamp, the Trump Dump of late that has people scratching their heads. While the candidate continues to confound people, making them vacillate between thinking he's serious, and then wondering if this is all just a scam to start some new venture, he makes decisions that further that confusion, rather than clearing it up.

For one, he hires the Breitbart guy, Steve Bannon, to run the campaign. This signals a hard right turn, with a fringey, conspiracy theory-spinning entity behind it. It makes you think it's going to be just balls-to-the-wall nutty from here on out, a merger of Crazy Right Wing World and the GOP.  This would either be a batshit crazy way to think you could win, or a way to shore up your bona fides with the hard right, in preparation for your new media venture.

But then you've got Kellyanne Conway--as far as I know, a kind of C-list but tenacious campaign strategist--and she seems determined to make him a real, viable candidate. Maybe a little of column A, a little from column B? I don't know. I still can't imagine that Trump really wants this job, not the daily grind of it. But I can believe that he's in so deep, he can't see a way out, and may be plotting both routes, both a "maybe I can win," route, and a "here's what I'll do if I lose" route?

Donald Trump's reshuffling of his staff this week portends a risky pivot: a bare-knuckled, outsider-focused effort where no tactic for taking down Hillary Clinton will be off limits. . .