Awww. I don't know if you've noticed, but 2016 has been hell on actors and singers who are of a certain age. And I mean, literally a certain age. It seems like if you're between about 67 and 70, and you're famous, you really need to be getting to a doctor and getting checked out. It's a relatively young age for "surprise" deaths, particularly among a set of people who you'd imagine have the resources for regular (and maybe even "platinum level") health care.

In recent days, we lost Gary Shandling, for which I ought to be whipped for not memorializing sooner. And today, Oscar and Emmy winner, Patty Duke. Duke has been on the periphery of pop culture for my whole life, popping up initially in my childhood through the occasional rerun of The Patty Duke Show, where she played identical cousins. She'd get the occasional starring role in a very important movie (usually on TV), or short-lived TV series. She played the first woman president in one (Hail to the Chief), a suburban mom in one (It Takes Two). She even got acclaim playing both major roles in two different versions of The Miracle Worker. But she was rarely front-and-center. To me, she was always a favorite, one of the spices in my pop culture stew. Very much, oddly enough, like her ex-husband, John Astin, who likewise would tickle me when he popped up in something.

But wow. These people aren't waiting to die of old age. I don't like approaching their age with the speed of a freight train, as they're dropping like this!

Patty Duke, who won an Oscar as a teen for "The Miracle Worker" and maintained a long and successful career throughout her life, has died at the age of 69.

Duke's agent, Mitchell Stubbs, says the actress died early Tuesday morning of sepsis from a ruptured intestine. She died in Coeur D'Alene, Idaho, according to Teri Weigel, the publicist for her son, actor Sean Astin. . .

Blogging Blahs Persist: State of the Union is F@#%ed

Though  it is clear that my passion for blogging my every stray thought flagged some time ago, I did give an effort until relatively recently at keeping the page current. Somewhere during this ridiculously long 2016 campaign, the ludicrousness of the proceedings seems to have sapped whatever remaining urge to write I did once have.

This weekend, I actually have an excuse. I had a memorial 1000 miles away for a friend who was far too young to pass unexpectedly. But, in the past, I would have come roaring back, eager to opine on the latest crazed happening. But I keep circling back to: what more is there to say?!

On the right, we have three remaining candidates from the previous clown car, all terrible in their own right, for their own terrible reasons. There is a delicious civil war going on in there, but it has practically consumed all other news already, and is being hashed and rehashed relentlessly.


On the left, there is a different civil war of sorts afoot: two decent candidates with similar voting records, but with seemingly irreconcilable allegiances of their own. Basically, there are three groups, fervent Bernie Sanders supporters who love their candidate almost beyond reason, to the point of trashing his competition, and her followers at every opportunity. You've got Hillary Clinton supporters, not quite as fervent, but sometimes getting nasty in return. And you've got "blue, no matter who" supporters of either Clinton or Bernie who may have allegiances one way or the other, but in no mood to fight over it.

I find myself in the last group: leaning Clinton, but wanting to smack upside the head liberal groups 1 and 2 (mostly 1), for allowing this idiotic fight to pull any attention from the clusterfuck going on in Right Wing World. We don't need it. Clinton vs. Sanders is a no brainer: either one will do, vs. the absolute insanity of voting for anyone on the right. Purists whine and bitch about establishment this, and "lesser of two evils," and blah, blah. Sorry, no. There is quite simply no contest with SCOTUS at stake. None. Blue, no matter who.

Still, the urge to blog has been the barest tug. I'm here, because it's been a week, and I don't want the blog to die. But I can't promise I'll do a lot better, unless something really lights my fire about something. But again, I'll try.
Posted at Monday, March 21, 2016 by James Greenlee
Email ThisBlogThis!Share to TwitterShare to FacebookShare to Pinterest
Labels: 2016 Presidential Election, Blogging, Donald Trump, Hillary Clinton

Hillary starts to take on more and more traits from Bernie Sanders to appeal more to millennials. Funny, and I'm sure the #FeelTheBern crowd will love it. But lets not forget, this is what Bernie started out to do. At the beginning, nobody thought he was a contender, but all agreed, it would get Mrs. Clinton to address his issues. Well, here ya go!

Saturday Night Live kicked off a fairly terrific episode this weekend with a faux CNN news report, announcing Ben Carson's (in likely Jay Pharaoh's last impression of him) endorsement of Donald Trump. This is mixed with the latest appearance of Larry David as Bernie Sanders. Lots of good stuff in here. 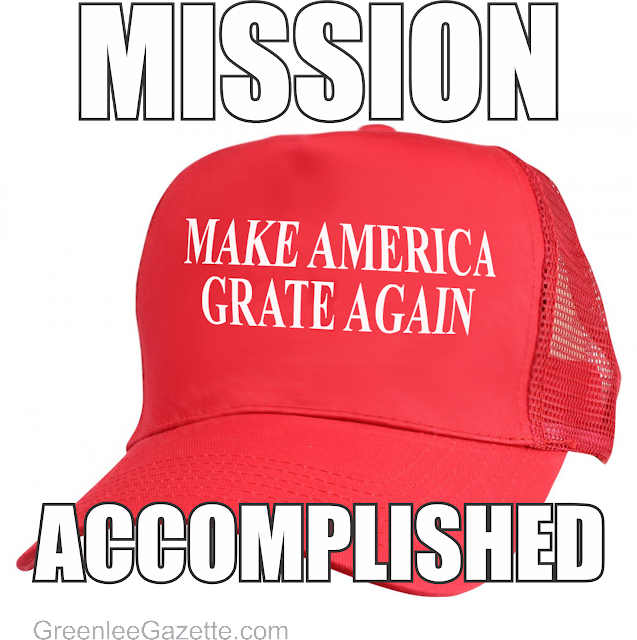 Hilarious. Somehow, they managed to make Ted Cruz more palatable, and somehow almost sympathetic. And though they're trying to parody his voice and delivery, I prefer this version. Enjoy!

For a while now, conversation in my house has been over the fact that Donald Trump's ascendency is a result of an out-of-control Republican Party building their own Frankenstein's Monster. The main difference ironically being that the angry villagers are actually on his side.

Former Daily Show correspondent Samantha Bee (via her new TBS program, Full Frontal) correctly finds Frankenstein's ancestor: and he is us. In other words, Democrats, who stayed home and ignored the 2010 election. I warned about this myself in several blog posts (to my admittedly tiny corner of the internets), but couldn't ever have foreseen what it would lead to. Samantha's right of course, but only partially. Lazy Democrats enabled the already angry, frothy GOP base to rise to the top and take over the mainstream. They furthered this effort by repeating their sloth-like behavior in 2014.

There's something less sexy about mid-term elections to swaths of Democrats. And let's face it. The only time you hear laments about our two-party system, is when we're down to the wire. Nobody seems willing to build up third or fifth national parties in the off-years. The only ones chugging away in those years, running the long game? Republicans. And as feckless and gormless as they can be, they're really good at the long game.

On Monday night, late night host Samantha Bee said Democrats should shoulder some of the blame for Donald Trump, the billionaire reality show star who is likely to become the Republican Party's presidential nominee. . .