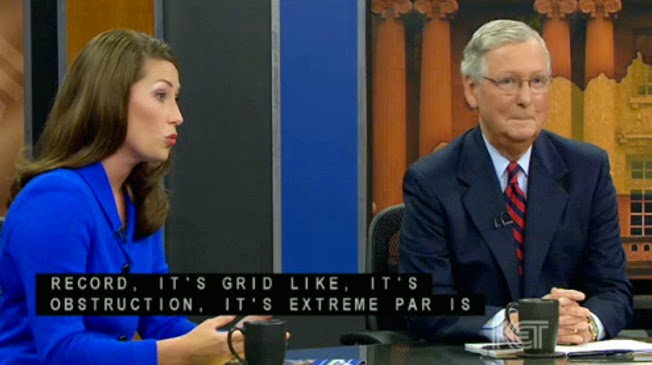 Mitch McConnell is talking out his ass again, this time at his debate with Alison Lundergan Grimes. Yes, Yertle seems to think we should eliminate every "root and branch" of the Affordable Care Act, and yet leave Kentucky's Kynect (or just its web site?) intact. The problem, of course, is that Kynect is ObamaCare, it's what it was always supposed to be, one of 50 state-run exchanges. And it worked! And it's popular! So, it puts Mitch in this trick bag.

I'm not particularly a fan of Grimes. I think she's a calculating, politics first, talking points-based candidate. I think she's hoping that Kentuckians are stupid enough to think she's anti-Obama, because they are stupid enough to vote against her for being an Obama supporter. I think there are better ways to play this, than posturing and fake-outs. But very nearly anyone would be better than Mitch McConnell. The fact that this is even close tells you that the "Kentuckians are stupid" gambit could very well work for either side.

Senate Minority Leader Mitch McConnell (R-KY) said on Monday night he wants to repeal Obamacare "root and branch" but keep the law's state-based insurance exchange in Kentucky, called Kynect. "I think it's fine to have a website. Yeah," he said during the first and only scheduled Kentucky Senate debate with Democrat Alison Lundergan Grimes, pressed on whether he wants to keep Kynect. . .