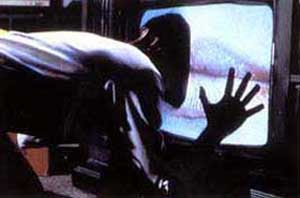 When I was a little kid, I remember my mother turning on the TV right as an episode of one of my favorite shows, Bewitched, was ending. I recall saying that some day, we wouldn't just be able to pick a channel, we'd be able to pick what show we would watch. I remember looking at the channel selector knob, trying--and failing--to imagine what that knob would look like with different shows on it, instead of channel numbers.
None of us could have imagined what we now have at our fingertips, not just on our TVs, but on our computers; even our phones. My highly indexed trivia stores in my brain are now completely useless with Wikipedia, IMDB, Google and Bing. But thanks to DVD, Blu-ray, DVR, Hulu and other web resources, my 5-year-old self gets to experience his wish as he never dreamed. . .albeit in a 43-year-old body. And he also gets to pay a ridiculously high cable/DVR/broadband/digital phone bill every month.
I'm experiencing a bit of a problem now, with all of this technology. With a four-day weekend within my grasp, but with The Other Half away for most of it, I had to plan around my tech obsessions. I had to make a checklist--actually done on an actual pad with a pen, imagine that!--to make sure I got something done each day. And I've actually done so. But I need to get out of the house and run some errands, and what am I doing? Sitting here blogging, because the idea for this post came into my head while I was showering.
It used to be that I'd sit at my desk on my computer, with the TV on for noise. A great show could pull me away from the computer, but usually, it was just to keep me company. Now, I'm finding myself doing the reverse. While watching TV, I'll actually pull the laptop over, and check on who is in the program, what reviews there are of it online, OOH, I got mail! And look, Tracy just said something on Facebook! Oh, wait, I have no idea what just happened on the show I'm watching!
Fortunately, the best $10 of my extremely expensive cable package is the DVR which lets you back up live TV. Awesome. But I figure, between DVDs, DVR, Blogger, Facebook, AOL and plain old television, I'm spending 80% of my awake time at home in front of some sort of screen. And I do approximately the same thing at work. It doesn't help that the DVDs have "extras," and that the internet has time-suckers like those mentioned above, and things like FailBlog.org and Engrish.com that suck me in for hours at a time. Sigh.
Well, I know what I've got to do. I've got to post this little nugget, close the program, close the lid on the computer, and get out in the world! Lucky for me, I got up early and all of this techno time sucking happened by 1:00 pm! There's still some day left, after all.
Posted at Sunday, September 06, 2009 by James Greenlee
Email ThisBlogThis!Share to TwitterShare to FacebookShare to Pinterest
Labels: Cable TV, Computers, DVD, DVR, Internet, New Technology