Blast from the Past: Perfect Pop Songs 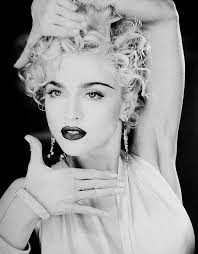 Pop music gets very little respect from music fans. For those of us who like it, it's just a fun confection, an enjoyable lark. From "real" music fans, pop music is disposable, meaningless, without artistic merit. The equivalent of Stephen King or Dean Koontz in the fiction genre. Well, you know what? I dig King and Koontz! And I dig pop music too!

There are numerous pop songs that just strike me as pop confection perfection. And this is my list of some of the best of the best.

1. Misery - Maroon 5 - This group, headlined by The Voice's Adam Levine, is one of the most successful acts at crafting pure pop perfection. Usually, they include a little profanity to add a little street cred. But their songs are just little balls of perfectly crafted song candy. Misery is one of the best, making an abusive relationship sound fun and bouncy! Yay! I'm in misery!

2. Express Yourself - Madonna - It would be impossible to narrow down Madonna's discography to find the best, most perfect pop song. That's why I didn't, and there is more than one. This one isn't just perfect, it has alternate versions that are equally perfect! And that shouldn't be possible!

3. Mony Mony - Billy Idol - This is an eighties version of a sixties song, that is largely meaningless. But it is absolute perfection in what it sets out to do: set dance floors on fire, and make people happy for no reason.

4. Steal My Sunshine - Len - Usually, when an act samples parts of another song to put into their own, the result is derivative, uninspired and something of a retread. In this case, one-hit-wonder Len achieves pop perfection, using Andrea True's More, More, More disco tune as a foundation.

5. Just Can't Get Enough - Depeche Mode - You can tell when even an "alternative" band has become mainstream when their old tunes not only get mixed in on "80s and More!" radio stations, but get put into GAP ads. This song might be from a band with a heavy artistic cred, but the song is a pop confection.

6. Vogue - Madonna - Leave it to Madonna to take an underground gay dance craze, and turn it into mainstream success. And then, make it enough of a classic that if you played it on any dance floor 20+ years later, it would still draw a crowd.

7. Waterloo - ABBA - I am of the opinion that ABBA's catalog--almost all of it--could be released today, and be successful. Many, if not most of their hit songs are masterpieces of pop music. Songs like Ring, Ring and On and On and On should be re-released, just to see what happens. But Waterloo, to me, is a perfect pop song.

8. A Little More Love - Olivia Newton-John - This one might seem like a stretch, but hear me out. Pay attention to Olivia's change-ups in melody. Notice that she changes the note structure in each lead-in to the chorus, and each chorus itself. Much like Adam Levine does in Maroon 5, Olivia plays with the notes, going all over the place, but always in tune, and sounding perfect.


Okay, kids, that's my bit for this week. Hope you had a great Easter and/or Walking Dead finale weekend! Have a great week, and happy Monday!