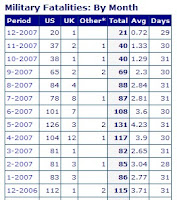 I've heard a lot of breathless reports on FOX "News" regarding how well the "surge" has worked. And in some ways it has. Military deaths--one measure of importance--are way down. That's terrific, but I'm a little troubled with how it is reported.
The Brit Humes and Bill Kristols of the world are a little too joyous at the reduced number. Sure it's good that the number is lower, but it kind of glosses over the fact that there still were deaths. Yeah, it's war, yeah it's a volunteer military, and yeah they knew what they signed up for. But has anybody ever come up with a rationale explaining what these deaths have accomplished? The "surge" after all, was supposed to be to allow breathing room for the Iraqi government to gel and set. Has it?

The graph above showing the decline in military deaths does indeed seem like progress. But take a look at the yearly chart. Success or not, there is no denying that we lost more good people this year than in any other year in the Iraq fiasco. I still say it's long past time to bring these people home. Barring that, tell us what "victory" and "winning" means. While they're at it, they should tell us what "losing" would mean. At least then, we'd know definitively when this thing should be over if only by George W. Bush's standards.
Posted at Saturday, December 29, 2007 by James Greenlee
Email ThisBlogThis!Share to TwitterShare to FacebookShare to Pinterest
Labels: George W. Bush, Iraq War, Military, Year's End