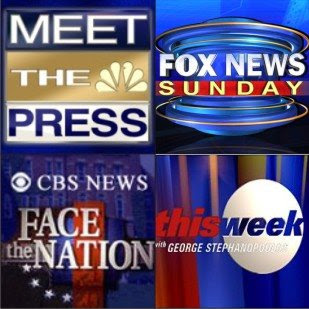 I opted for This Week with George Stephanopoulos after all. Why? I don't know.

- It starts with Nancy Pelosi here too. The Republican guy (don't care what his name is) is on the CIA's side. Jim Webb says "I just don't think it's that big a deal." Me too, Congressman. "Torture doesn't work." Agree with that too. But he thinks this torture dealie will "resolve itself." Mmm hmm. I'm not on board with that one.

- Fine distinctions between "enemy combatants," "prisoners" and "prisoners of war." Nobody seems to get around to explaining why someone like Timothy McVeigh could be handled by the penal system, and these terrorist (suspects) cannot.

- George Stephanopolous may be a little surfacy like other politics-TV talking heads. But he goes a little deeper, and seems much more thoughtful than David Gregory who is about as deep as the dimple on a golf ball.

- This Week's round table has a different feel from the other shows. It feels a bit less stilted, and regimented, and comes off like a more genuine conversation. Add to that a genuine (instead of a token) liberal in Kristina Vanden Heuvel, and you've got a little more balance too. I don't care what anybody says, there is no "liberal bias" on these Sunday morning shows. They are almost always right-leaning.

- George Will actually questions why people seem to think that we as Americans have insufficient capability to house and detain terror suspects. Good on you George, I've been wondering that too. Do they have super powers or something?

That's enough for this weekend. twenty minutes to go on TW. And sorry, Bob Schieffer (and whoever or whatever CNN does on Sundays), I don't have it in me to seek out any more.