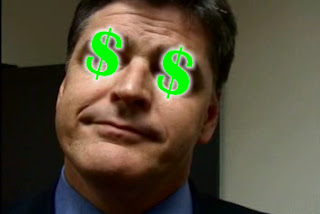 Can we please stop calling this ridiculous outfit a news station?

Kasich Shows He Has Hannity In His Back Pocket: Goes On Show To Pitch His Website, Raise Money For Campaign

More than lavish dinners, snazzy mailers, and email blasts, GOP candidates are flocking to the best fundraising tool this election season: Fox News. As Senate candidate Sharron Angle (R-NV) so aptly pointed out, just one mention of a campaign website on a “friendly press outlet” like Fox News host Sean Hannity’s show can translate into millions of campaign cash. Delaware’s colorful senate candidate Christine O’Donnell (R) even flaunted Hannity’s support before a meeting of GOP strategists, saying “Sean Hannity’s in my back pocket, and I can go on his show and raise money by attacking you guys. . .”

EDITOR'S NOTE:  I posted this excerpt before I finished reading it, and didn't realize that the example being used here is actually Sean Hannity's radio show.  I thought about editing the post, and then realized it really isn't necessary.  Sean Hannity does this exact same thing on his television program. So do other FOX "News" hosts.  The differences between talk radio and FOX are paper thin, with tons of bleedover.  So, the post stands.
Posted at Wednesday, October 20, 2010 by James Greenlee
Email ThisBlogThis!Share to TwitterShare to FacebookShare to Pinterest
Labels: 2010 Election, FOX "News", Fundraising, Right-wing Bias, Sean Hannity