Frank Rich: McCain Wins in November? Not so Fast! 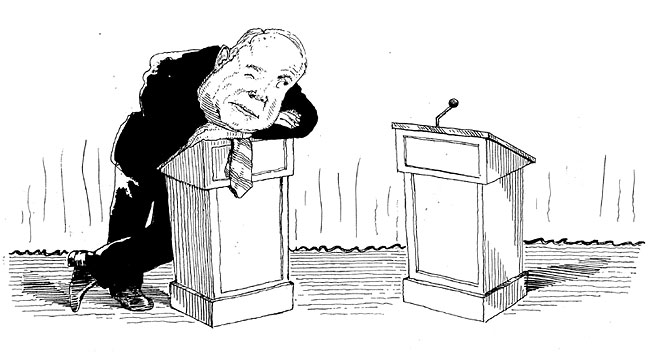 Image from source, New York Times
It's about time a well-known writer has acknowledged the fallibility of the mainstream media, and of "conventional wisdom." There has been a progressively louder wail, and wringing of hands over the protracted Democratic primary contest. Even one of my favorite pundits, Rachel Maddow, is predicting a John McCain win in November, because of the so-called deep divide in the Democratic Party.
While that theory cannot be discounted, it also isn't necessarily true. Democrats have been turning out in numbers far greater than Republicans for these primaries, even before John McCain was the nominee. Add to that fact that many conservative Republicans were adamantly against McCain until there wasn't anything they could do about it.
And in the excerpted story below, Frank Rich points out yet another fact that goes in the Democrats' favor. So don't get your panties in a bunch just yet, folks! Even if all of those Clinton or Obama supporters who swear they'll vote for McCain if their pick doesn't get in, actually mean it, we still have numbers on our side.
[Excerpt]
How McCain Lost in Pennsylvania
IT’S a nightmare. It’s the Bataan Death March. It’s mutually assured Armageddon. “Both of them are already losing the general to John McCain,” declared a Newsweek columnist last month, predicting that the election “may already be over” by the time the Democrats anoint a nominee.
Not so fast. If we’ve learned any new rule in the 2008 campaign, it’s this: Once our news culture sets a story in stone, chances are it will crumble. . .
Read more at: New York Times
Posted at Saturday, April 26, 2008 by James Greenlee
Email ThisBlogThis!Share to TwitterShare to FacebookShare to Pinterest
Labels: 2008 Presidential Election, Barack Obama, Frank Rich, Hillary Clinton, John McCain, New York Times, Vote Democrat 2008