I get a lot of emails from "concerned" friends and family, seeking to expose the Muslim-ness of Barack Obama, or what stupid thing Hillary Clinton said or did. You probably get 'em too. With the help of Snopes.com, I've debunked a lot of those (to the consternation of the sender), even here on the blog.

So imagine my delight with finding an "urban legend" type email to be true! Nearly 100% verifiably true--far closer, at least than any of the other ones I've seen. It's an moldy oldie, but it's also a goody. Remember, this was written in 2002, when George W. Bush's public persona was far newer--and a great deal more popular. Someone got the idea to assemble a batch of Bushisms into a poem, each line being an actual utterance--with only slight alteration--from The Decider his self [sic, intentionally]. Check it out (click to enlarge). 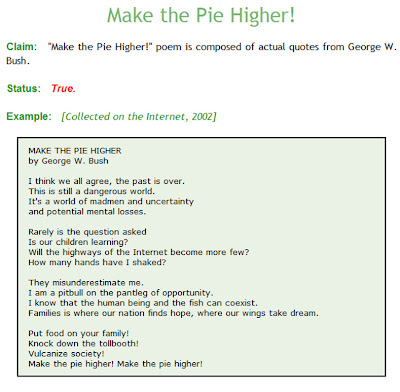