Turn Off My TV? No Thanks! 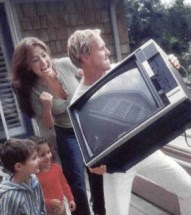 Image from linked source, Raw Story
We've come to that annual time when we're urged to turn off our TVs and do something productive. Well, that's just fine, and I'm sure in general it is a good idea. We've become a nation of sheep in some respects, and a lot of people really need to get some other kind of input.
Just the same, they've picked a rotten time to urge this action. Back in January, when the writers' strike was in full swing, it would have been no problem. TV in general sucked. But now that the slow trickle of new shows has become more of a gusher, it's not worth it. With Lost, Desperate Housewives, and Brothers & Sisters back this week, I've just got to opt out.
Maybe they should do this thing in May, right after the traditional TV season is over. They'd convince a lot more of us then.
[Excerpt]
A Smart Approach to This Week's TV Turnoff
Today marks the beginning of the 14th annual Turnoff Week, in which we're told to renounce television and computer screens in favor of wholesome activities like family dinners, reading, and sex. (Grown-ups only on that last one, please.) . . .
Read morer at: US News and World Report
Posted at Monday, April 21, 2008 by James Greenlee
Email ThisBlogThis!Share to TwitterShare to FacebookShare to Pinterest
Labels: TV, TV Turnoff, Writers' Strike