My Friends, John McCain Irritates Me! 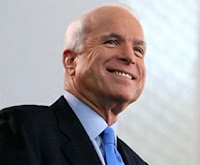 Photo from McCain email
I'm on various mailing lists, due to this blog and other internet petition signings, and the like. Strangely, I get stuff from both Democrats and Republicans (and not just a few religious mailers, if you can believe it). And yesterday, I got the latest email from John McCain's campaign.
Now, I know that the Karl Rove way of doing things is to embrace your negatives, and attack your opponent's positives. It's amazing that this stuff works, but the American populace is incredibly easy to hoodwink. Just check out the "bittergate" flap Barack Obama has had to deal with. Ridiculous, really.
But back to McCain. One of the most irritating things about him as a speaker (in addition to his incessant blinking when talking) is his use of the phrase "my friends." He uses it more than The Book of Mormon uses "and it came to pass." Occasionally, he changes it up a little, saying, "my dear friends." But it's like your step-dad who sniffs every few seconds, the aunt who clears her throat five times a minute or the friend who tells stories punctuated by "uhhhs" every four words. . .once you clue into it, all you can do is cringe (and count) with each instance of the irritating thing.
So, the email I received from McCain, in true Rovian fashion, embraces this weakness. It starts with those very words. . .
[McCain Campaign email]
Lower Gas Prices?
My Friends,
This week, I laid out an economic plan aimed at providing immediate and long-term relief for all American families. One of the key components of this plan is a suspension of the federal gas tax on gasoline from Memorial Day to Labor Day of this year. . . .
Yes, he seriously said "long term relief" and then followed in the next sentence with a short-term plan. Like Bill Maher said, it's like Grandpa giving us $5.
Posted at Saturday, April 19, 2008 by James Greenlee
Email ThisBlogThis!Share to TwitterShare to FacebookShare to Pinterest
Labels: 2008 Presidential Election, Irritation, John McCain, Karl Rove, My Friends, Rant, Vote Democrat 2008