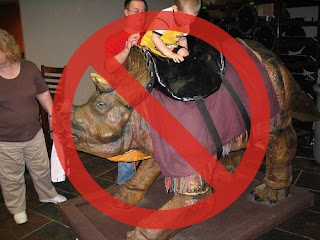 I'm in the middle of a great book, by Richard Dawkins, called The God Delusion. In it, the author proclaims that his goal is for each reader to finish the book an avowed atheist. I've gone into the book agnostic to begin with--and I'm only half-way through it--but I'd venture to say he'll have won me over by then, at least in the religious sense. Atheists tend to discount all religion, as well as all things supernatural, and I'm not ready to drop the latter (more on that in a future review).
My reason for bringing this up, is that Dawkins approaches religion from a Darwinian point of view. It turns out, most arguments for God can be relatively easily debunked using Darwin's science, or logical extensions of it. That is why this article caught my eye, because it would seem that recent discoveries in genetics further bolster Darwin.
As interesting as all that is to me, I'm further intrigued by the response to this story on the arch-right-wing website, Free Republic. A normally lock-steppy, cohesive bunch, Freepers start to come undone when the subject of Evolution vs. Creationism pops up. After the excerpt below, check out their little slapfest. It's highly entertaining.
[Excerpt]
Scientists find a fingerprint of evolution across the human genome
The Human Genome Project revealed that only a small fraction of the 3 billion “letter” DNA code actually instructs cells to manufacture proteins, the workhorses of most life processes. This has raised the question of what the remaining part of the human genome does. How much of the rest performs other biological functions, and how much is merely residue of prior genetic events? . . .
Read more at: PsyOrg
And the Freepers' reaction: Free Republic
Posted at Thursday, April 24, 2008 by James Greenlee
Email ThisBlogThis!Share to TwitterShare to FacebookShare to Pinterest
Labels: Agnosticism, Atheism, Creationism, Evolution, Free Republic, Freepers, Intelligent Design, Religion, Richard Dawkins, Science is Cool