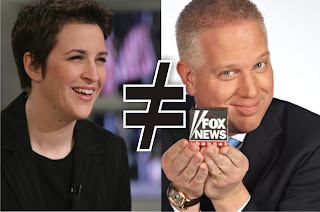 Okay, here's the deal. I worked very late on Thursday night, and then I came home and worked some more. Blogging has just had to wait. But I always like to have something new up for the next day's business, so I went trolling on the internets. So, what did I find? Well I'm not done, but I was intrigued by this video clip.

Now, I'll be honest, I didn't watch it all. I'm not sure I can or will. Glenn Beck is friggin' nuts, y'all. And I know he has this weird power to convince others to be as nuts as he is, so watching the whole thing might be ill advised anyway. However, I took note of something while I watched.

Often, MSNBC is offered up as the "flip side" to FOX "News." Rachel Maddow is said to be the flip side of Glenn Beck. It's not true. Over the past week, Maddow--for instance--has offered up insightful, informative and most notably, sober information about Japan's nuclear crisis, among other things. She tries to be positive (though she's been noted to say that she's by nature a pessimist), fair and affable. Glenn Beck is affable too. But his approach is so different. So weirdly different. Where Rachel explains, Glenn lectures. Where Rachel teaches, Glenn indoctrinates. One is tutoring, one is preaching. Just watch this. But I beg you, just for a little while. Don't get sucked into the crazy!