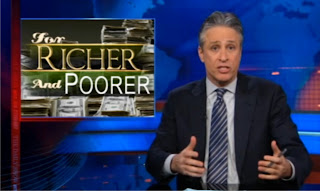 Since this whole battle between Republicans and unions started up for this round a couple of weeks ago, I've felt a building anger. It's been an anger I was having a difficult time articulating.  It boils down to: whatever bad thing is going on in the country, there seems to be slack cut to big business and rich people, and blame placed on working people and the poor. We've seen this in Wisconsin. Gov. Walker gave a massive tax cut to business, and then he brought a hammer down on union workers. For all the "jobs, jobs, jobs" chanting from the right, there sure is the implication that if you work for a union or for government, you don't have a "real job." Which is strange, given that many of the people saying this are in government.

I've never been in a union, and have in fact had run-ins with them in the past. The Other Half on the other hand is in a union, and yet we almost got into a fight the other day over this issue, mostly because I wasn't articulating my frustration very well (and TOH may have unwittingly internalized a little too much right-wing rhetoric). I was practically yelling, "Yes, the government is in economic trouble, but WHY is the first solution always to stomp on workers and poor people?" TOH started in on property taxes, and long retirement pensions, and whatnot. And there may be areas on that end that need revision and reform. But you can't deny that this big, huge economic crisis was caused mostly by politicians, lack of regulation and enforcement, and greedy Wall Street and banking fat cats.

This was fraud on a massive scale. We already baled them out. None of them went to jail. Corporations continue to get billions in subsidies, practically zero taxes, they're sitting on trillions of dollars, and partisan jackasses like Walker want to clamp down on working people. Nice. Well, I still haven't articulated this very well, but you know who did? Jon Stewart. Take it away, Jon.