What is the End Game of GOP "Austerity?"

This is a plain and simple question to the universe: what is the end game of the "austerity" plan of the GOP in America?  We're "broke" as a nation and as individual states, they say. We can't afford social programs, so the poor, the sick, the old and any other unfortunates will have to cut wayyy back. We can't afford pensions, unemployment insurance, or social security, even if you've already paid into those programs. Doesn't matter, we're broke. You think the money you paid gives you some sort of security? Screw you! 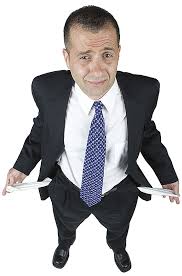 But, in order to draw interest from the fat cats from Wall Street and the banking sector--companies who are sitting on trillions of dollars--we've got to sweeten the pot. We're broke you understand, but we've got to spend anyway. Not on welfare, unemployment, medicare, medicaid, social security. . .no. . .tax cuts and subsidies to the super duper rich! Yep! Money for the billionaires! In tax cuts and subsidies and other enticements! That will create jobs! Even though they're sitting on more money than ever, we're going to give them more, and that will create jobs!
Don't go crying to your union either. Your union is busted! Why should you have any protections when nobody else does? If the non-union people get treated like crap, you should be treated like crap too! The new austerity means, everybody gets treated like crap! Bridges and roads are falling apart? Tough! People can't afford the very basics of life? They can suck it up! Screw 'em!  This is a fight between the winners and the losers, and you lose!
Seriously though, how long can this go on? How long can the "winners" actually claim to be winners if the vast majority end up losers? This trajectory cannot end up good for anybody if things keep on like they're keeping on. I know that most corporations and big entities tend to live in the "now." Think of Ford in the era of the Expedition and Excursion when gas hit $4.50 per gallon for example.

But what is the end game here? What's going to happen if 85% or more of us fall below "middle class", and only 1 or 2% end up in the "upper class?" How does that work? Sure, for a little while, the GOP may be able to hold on to power with their 90% of the corporate election dollars. But when most of us are being crushed under their boots? Will we still vote for them? What the heck do they think is going to happen? I'm serious, what is the end game?
Posted at Thursday, March 31, 2011 by James Greenlee
Email ThisBlogThis!Share to TwitterShare to FacebookShare to Pinterest
Labels: Economic Crisis, Economy, Money