Worth Another Look: Julia Sweeney's Letting Go of God 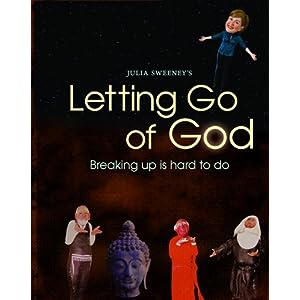 Every once in a while, I run across one of my older posts, and feel the urge to rerun it. After all, my daily audience sees a lot of turnover, and as NBC used to say, "if you haven't seen it, it's new to you!" Plus, I really, really loved Julia Sweeney's characters, her blog, and her outlook on life.

I've said on the blog before that I'm not religious. In fact, I can be downright anti-religious to a point.  I consider myself agnostic, though in truth I suppose I'm closer to an atheist. The problem for me has always been that while I don't believe in any deity, or that any religion is real, I can't know--any more than a religious person can know--that I'm absolutely right, and everyone else is wrong.

So, I label myself agnostic. But firmly agnostic. I'm not on the fence, just unable to decide what I really believe. I came to this place by way of bible study, which isn't as odd as it sounds. Many atheists and agnostics started on their path by going on a religious journey, or just learning more about their own religion.

No one has done a better job dramatizing their own path to atheism than Julia Sweeney, former star of Saturday Night Live.  Her one-woman show, Letting Go of God chronicles her path as a life-long, by rote Catholic, to a doubter, and through a quest to find out exactly what God is.  Ironically, her quest was spurred by a couple of Mormon missionaries out to share their "message from God."  They arrived at her doorstep at a critical time of soul searching, which is also how they probably are able to actually convert people to Mormonism.

For Julia--who wanted desperately to help them with their impossible to believe sales pitch--their visit instead sent her on a journey that eventually leads to her rejection of God and religion.  Along the way, Julia is both hilarious and heart breaking. She takes religious debate to a whole new level, by presenting a question, accepting a religious answer, then turning the answer over and examining it for a better answer. Or no answer.

One of my favorite sections of her piece involved the resolute pronouncement by a religious person that the human eye is so complex, it could not have been evolved. After all half and eye is of no use.  And then she started learning about the eye, and found out that half an eye is advantageous. About half as much. . . Great stuff.  The whole thing is so thoughtful, and so well presented, it is difficult to see how it could be refuted.

While I came to the same conclusions Julia has, I can't honestly say that my examination was as thorough, or my quest as long. Perhaps my vague Christian upbringing made my trip shorter, and her entrenched Catholicism made hers longer. But her journey is highly educational, and if nothing else explains disbelief to those who don't understand it.