I found this story fascinating, because I too have thought there was something odd going on with John McCain's face, but I couldn't put my finger on it exactly. It reminds of the strange, intermittent jaw-wiggling George W. Bush sometimes does when finishing a sentence.

I've already noticed for some time that John McCain blinks a lot. And he has these little button eyes that make it extra noticeable. So it isn't surprising that a change in the way his eyes look was setting off alarms. It will be interesting to see if anything comes of this, or if it has anything to do with yesterday's bizarre behavior.

Anybody else notice anything weird with McCain's left eye recently? 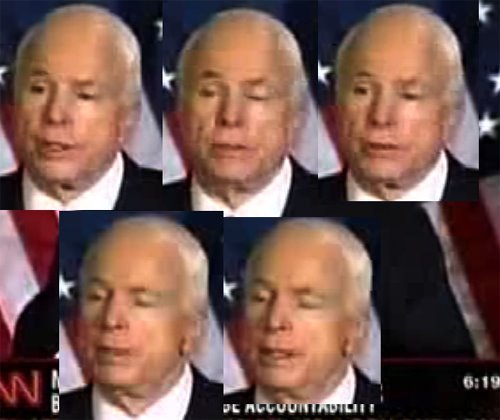 Joe and Rob both mentioned this to me in the past week, and now several readers have brought it up. I also just noticed that Atrios picked up on this too today. Something wrong, changed, droopy or puffy with McCain's left eye. Anybody else notice anything? I just searched Google a bit more and found references to his eye being droopy in April and May of this year as well. But whatever it is, it seems to be intermittent. (McCain has had 4 bouts of melanoma, and did in 2002 have a benign growth removed from under his left eye.). . .