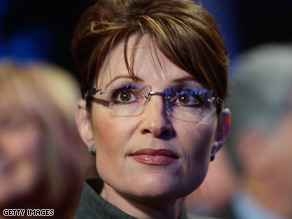 Photo from source, CNN
What do you do if your running mate in a Presidential election is absolutely clueless about world affairs, and very likely, to anything outside of her small town and state? Why, you cloister her away. Away from prying eyes. Away from reporters. And you put her through "debate boot camp!"
I completely understand why they're doing this of course, for what else can they do? But I'm reminded of a friend (hey out there, Dallas!) who had to take the Ohio State Bar exam. He's a very smart guy, having been salutatorian in high school, great marks in college, and the same in law school. And he had to go through his own rigorous "bar exam boot camp." He spent--at the very least--a week cramming for the thing, every spare minute. And he passed.
But--and this is a big but--he had years of prior knowledge stored up before the cramming began. I haven't asked him personally, but I don't think he'd put money on passing the thing if he'd come into it cold. They can't possibly cover everything. Oh sure, she'll have more words and phrases to cram into her answers, making it less obvious that she didn't know this stuff two weeks ago. But unless the moderator and Joe Biden are ridiculously easy on her, she's bound to traipse into one of her long, excruciating sentences to nowhere.
[Excerpt]
Palin in 'debate camp' until Thursday

Gov. Sarah Palin will now spend two and a half days near Sedona, Arizona, to prepare for Thursday's debate, instead of prepping in St Louis, as originally planned. . .
Read more at: CNN