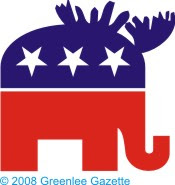 While the mainstream press and liberal blogs have been talking about the diminishing impact of Sarah Palin, conservative blogs have been busy deifying her. Not since Ronald Reagan (or perhaps, Ann Coulter) have I seen a person lauded with so much fawning praise.
Now, admittedly, my source for this belief is FreeRepublic, a right-wing site with its partisanship turned well past 11. There isn't a bad thing that can't be blamed on a Democrat at FR, and there isn't a good thing that hasn't been accomplished by a Republican. A story about reporters and citizens being shut out from seeking information on Palin in Alaska is a good place to start to show you what I mean.
Apparently, if you are an Alaska citizen, and you want some information, you are forwarded to the McCain-Palin campaign. Same for the press. This would provoke outrage from your average FReeper if it was the State of Illinois, and the information being sought was about Barack Obama. But when it's about Palin? Not only are they all for the stonewalling, they vehemently defend Palin, and attack anyone seeking information as an evil Democrat.
There is a certain amount of this sort of behavior from left-wing sites about their candidates, sure, but with an all together different vibe. Go to any left-wing site, and you will find some glowing accounts of Obama. But virtually all will be peppered with cautious commentary, and more realistic opinions too. My experience on right-wing sites as it relates to Palin, shows no such restraint or realism.
They love her. I mean love, in an almost mentally unbalanced way. You'll find photo essays, with flattering pictures of Palin, mixed in with shots of her and a dead moose, and astride an ATV. For a woman that most of these people have known for mere weeks, she has ascended from candidate to deity. She is wonderful, and any question about that will be beaten down!
All of the right-wing complaints about Barack Obama should have been effectively eliminated by the nomination of Palin. Wacky church? Check. Unsavory associations? Check. Inexperience? Check-mate. But these same complaints are still being used against Obama, and utterly ignored as they pertain to Palin. There isn't anything that is in-bounds to ask about her, it's all attacks and smears. And if anything does come to light? Doesn't matter! We looooove her!
What's more, many conservatives--even otherwise rational ones (hello, Les!) are under the impression that the bulk of the negative attention paid toward Palin is the personal, family stuff. Now forget that if Obama were in the identical situation that FOX "News" would be running with it 24/7; the fact is, it just isn't true. Questions about the oddly named children and their parentage, while asked in the initial days of Palin's nomination, aren't even on the radar from the mainstream press, rarely discussed (outside of snarky humor) on left-wing blogs, and pretty much relegated to comic fodder for late night comedians. The McCain campaign has tried to paint all Palin criticism as gossip, and that seems to be working, true or not.

But are there conservatives out there who are not enamored with Palin? There just has to be an underground conservative site--where worries about Palin's experience, and readiness to possibly become President are aired--out there somewhere. It's not possible that all conservatives are under the Palin thrall. Is it?

If you want to see just one internet discussion that shows what I'm talking about, here's a place to start. Believe me, it's easy to find more: Free Republic