George W. Bush Appears? Did He See His Shadow? 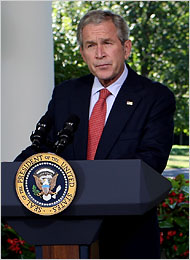 Photo from source, New York Times
It's an uncomfortable fact of life: George W. Bush is still President. And the current financial crisis--while bad for many reasons--causes one complication that really isn't being covered. That is, a crisis like this requires a sitting President to address the American people, offer assurances, calm the people, and come up with a plan to fix it.
The problem is, most of us just want Bush to go away. He's not reassuring, his appearance annoys rather than soothes, and he's never had a plan that worked. . .at least not on purpose.
Bush finally did his duty, and came out from hiding to do some Presidentin'. Goody for us.
[Excerpt]
Bush Emerges After Days of Financial Crisis
On Thursday, the president spoke.
It was brief, two minutes. His brow was furrowed, and his words were careful: “The American people can be sure we will continue to act to strengthen and stabilize our financial markets and improve investor confidence.” Then, having imparted no specifics, he once again slipped out of sight. . .
Read more at: New York Times