Sunday Talk Shows, Take 2: Do We Know Obama Yet? 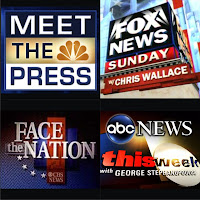 My take on the rest of the Sunday morning political chat-fests (excepting This Week with George Stephanopoulos, which is pre-empted by NASCAR--of all things--in Las Vegas):

Meet the Press: I've already covered the interview with the campaign surrogates, which blew. Following that, we got a contentious debate between two hopeful Senators who I don't remember from a state I don't remember. The meat of the show was an interview by Tom Brokaw of Bill Clinton. I've previously thought that Clinton's alleged tepidness of support for Barack Obama was overblown. Until this morning. Jesus, Bill, could you at least fake a little enthusiasm? And for God's sake (and this applies to all Democrats), enough of the laudatory, effusive "war hero" praise for John McCain, right before criticizing him for something. Nobody did that for John Kerry, a significant double standard.

FOX "News" Sunday: Always the most cringe-worthy of all the Sunday shows, today was really more of the same. Chris Wallace asks leading questions, and politicians to varying degrees, answer the way they wanted to anyway. And as always, the ludicrously named "Power Panel" takes up half the show--the only show that can be counted on to allot half their airtime to pure (and often wrong) speculation. Not a single thing from this morning's show stands out in memory.

Face the Nation: Barack Obama was the sole guest for the half hour show, and is the reason for the headline of this piece. The most frequent criticisms of Obama are variations on a theme: we don't know him; who is this guy?; he's scary; he's an unknown quantity we can't risk. . .etc., etc. OK, look. This guy has written two autobiographies (by the age of 47!). He's been campaigning in the public eye for over a year and a half. He's been picked apart by right-wing talk radio, wing-nut blogs, Hillary Clinton and FOX "News". He's performed well in debates and interviews. And he was clear, direct and thoughtful on Face the Nation this morning. Can we lay to rest the fiction that we don't know who he is?
Posted at Sunday, September 28, 2008 by James Greenlee
Email ThisBlogThis!Share to TwitterShare to FacebookShare to Pinterest
Labels: 2008 Presidential Election, Barack Obama, Bob Shieffer, Chris Wallace, Face the Nation, FOX "news" Sunday, Meet the Press, Tom Brokaw, Vote Democrat 2008