Sarah Palin, To Debate or Quit? 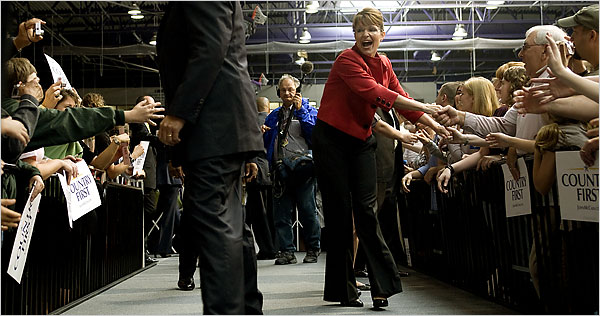 Photo from source, New York Times
George W. Bush has--with the help of Karl Rove--perfected the art of setting a very low bar. Selling a "low expectations" story to the public before a debate or important speech has a way of working to the advantage of a candidate, if they just show up with their shoes on the right feet, and their clothes buttoned properly.
I think we can safely say that the bar has never been lower for a candidate on a Presidential ticket, ever. If Sarah Palin can limbo under the bar being set for her and do worse than we expect, she wouldn't be asked to leave, she'd be "disappeared." But if she makes it that far--and there are rumblings that she might be forced out before the debate--she's very likely to do better than we expect.
If she manages to muddle through without a major gaffe (a toughie, but maybe she is the quick study they say she is), and Joe Biden launches into one of his long winded stories, or puts his legendary foot in his mouth, it may be just enough to make the next Saturday Night Live Tina Fey skit more about Biden than it is about Palin.
[Excerpt]
Concerns About Palin’s Readiness as a Big Test Nears
A month after Gov. Sarah Palin joined Senator John McCain’s ticket to a burst of excitement and anticipation among Republicans, she heads into a critical debate facing challenges from conservatives about her credentials, signs that her popularity is slipping and evidence that Republicans are worried about how much help she will be for Mr. McCain in November. . .
Read more at: New York Times
Posted at Monday, September 29, 2008 by James Greenlee
Email ThisBlogThis!Share to TwitterShare to FacebookShare to Pinterest
Labels: 2008 Presidential Election, Joe Biden, Sarah Palin, Saturday Night Live, Tina Fey, Vote Democrat 2008