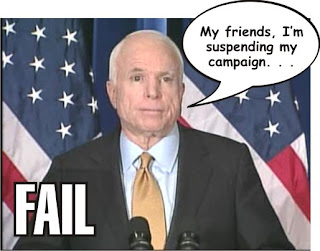 As The Other Half said to me this morning, "John McCain fumbled the 'Hail Mary' Pass?" It certainly does look that way, doesn't it? I'm quite sure that after eight years of rationalizing, making excuses and cognitive dissonance, the right-wing has some kind of spin for this that doesn't equal epic fail, but I'm not sure it's going to play.
So, tonight's debate should be interesting. If my suspicions are correct, McCain pulled this whole stunt after performing poorly in pre-debate practice sessions. So with all the other stuff going on between then and now, he must really be having to cram now. Maybe he thrives on pressure? Maybe expectations will be low, and he will easily meet them, I don't know. But, unless Barack Obama really steps in it tonight, I think he's got a good chance of doing well.
[Excerpt]
The Debate Is On; McCain Will Attend

Republican John McCain agreed to attend the first presidential debate Friday night even though Congress doesn't have a bailout deal, reversing an earlier decision to delay the forum until Washington had addressed the financial crisis. . .
Read more at: AOL News