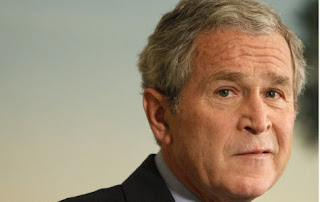 Photo from parent source, Huffington Post
I know that conservatives would sneer at this headline and say, "George W. Bush isn't running for anything. His approval ratings don't matter!" Well, I respectfully disagree. When is the last time a party's President has suffered approval ratings so low, and seen their next candidate get elected?
Now, this has been an atypical campaign, and the electorate is strangely committed to their parties regardless of "the facts on the ground." But still. . .
[Excerpt]
Historic Disapproval: Bush Hits All-Time Low Amid Economic Meltdown
Barack Obama maintains an advantage on the economy, especially economic empathy, and he's cracked majority acceptance on his key challenge, experience. But the political center remains unrooted, keeping John McCain in the race, albeit against headwinds. . .
Read more at: ABC News (via Huffington Post)