Remember the Other VP Candidate? 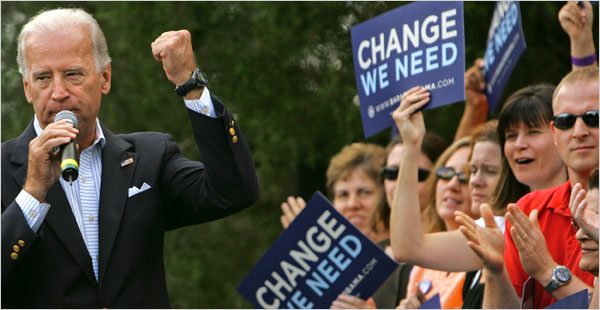 Photo from source, New York Times
Lost in the swirl of attention over John McCain's choice for running mate, Sarah Palin, is almost any attention for Barack Obama's pick, Joe Biden. I'm guilty of that too. But there are of course plenty of reasons. Biden is a known quantity, and aside from putting his foot in his mouth on several occasions, there isn't a whole lot of dirt to dig up on him.
Yes, there was a plagiarism charge wayyy back in the 1980s (around the time of McCain's Keating 5 controversy, if I'm not mistaken). But even that was rather blown out of proportion at the time, and pales next to the steady stream of lies flowing from McCain-Palin. Another reason Biden gets scant attention is that he's an old war horse, and Palin is a shiny new moose. Or was that pig? Pit bull? I keep forgetting, but I'm sure it has something to do with lipstick.
Anyway, Biden has not been cooling his heels while the spotlight shines elsewhere. He's taking shots at McCain, as any good running mate would. And he may not be getting the press, but I'll bet he's landing some good shots out there. Every little bit helps.
[Excerpt]
Meanwhile, the Other No. 2 Keeps On Punching
“John is so out of touch, he just has no idea,” charged Mr. Biden, the Democratic vice-presidential nominee, who called his “old, dear friend” someone who “just doesn’t think,” who is behaving in a repugnant manner and who is peddling “Republican garbage,” and malarkey. . .
Read more at: New York Times