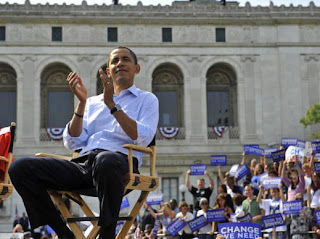 Photo from source, AOL News
Well this is good news, though I wasn't so sure by the AOL splash page: "New poll shows election shift: Who's up, who's down?" I thought to myself, "Well, Barack Obama was up, so is he down now? How in the bloody hell did that happen?" I mean, John McCain has had a pretty lousy couple of weeks, culminating in the bizarre idea to suspend his campaign. His debate performance was perfunctory, but Obama held his own, despite the material supposedly being in McCain's "wheel house."
So, I was relieved to find out that AOL just has a snappy headline writer. According to this poll, Obama has hit the magic 50% mark, an area that pollsters have been saying is a number that dramatically improve his odds for winning. Here's hoping he stays there, and registers similarly in other polls.
Never forget Karl Rove though, and his ability to pull off an "October Surprise." And also never forget that even though the bag of tricks has been seemingly emptied, that Rove is more than eager to use something that isn't true to smear his opponents with.
[Excerpt]
Obama Moves Up, McCain Down in Poll
Barack Obama leads John McCain, 50% to 42% among registered voters in the latest Gallup Poll Daily tracking update for Thursday, Friday, and Saturday -- just one point shy of his strongest showing of the year. . .
Read more at: AOL News
Posted at Sunday, September 28, 2008 by James Greenlee
Email ThisBlogThis!Share to TwitterShare to FacebookShare to Pinterest
Labels: 2008 Presidential Election, AOL, Barack Obama, John McCain, Polls, Vote Democrat 2008